Dec11 Comments Off on How post-racial is our society? 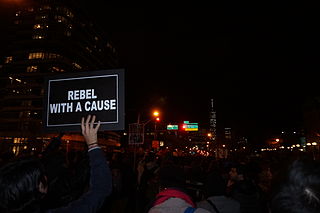 Ever since it was announced that Officers Darren Wilson and Daniel Pantaleo were not to be indicted, protestors have taken to the streets. The murders of these unarmed black men and countless others don’t exist as isolated incidents for these crowds, stifled by a policeman’s fatal chokehold on Eric Garner, whose last words were “I can’t breathe.”

With these protests were counts of looting and property damage. The media and members of the public have even gone as far to characterize the protestors, who are simply reacting to systemized oppression, as violent.

The problem is, the looting is overshadows the larger crime that it’s a reaction to. The attention has shifted from the instigator to the reactor and how he/she chooses to react, which places an unfair burden on the oppressed with almost no burden placed on the oppressors. We cannot forget the gun that shot Michael Brown while pointing the finger at the looters.

But really what’s most telling about the media’s criticism is how we value life. While looting is financially damaging, it’s ultimately harmless. And it’s met with more vehement condemnation than the murder of a black man.

This may very well be what Martin Luther King Jr. was talking about when he said:

“It is not enough for me to stand before you tonight and condemn riots. It would be morally irresponsible for me to do that without, at the same time, condemning the contingent, intolerable conditions that exist in our society. These conditions are the things that cause individuals to feel that they have no other alternative than to engage in violent rebellions to get attention. And I must say tonight that a riot is the language of the unheard. And what is it America has failed to hear? It has failed to hear that the plight of the negro poor has worsened over the last twelve or fifteen years. It has failed to hear that the promises of freedom and justice have not been met. And it has failed to hear that large segments of white society are more concerned about tranquility and the status quo than about justice and humanity.”

What are we more concerned with?