Dec02 Comments Off on Hollywood takes on the Bible this year, with films like “Exodus: Gods and Kings” and “Noah” 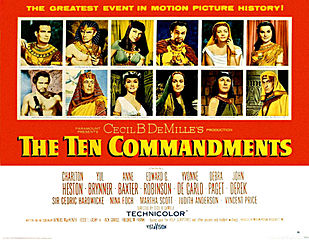 The Old Testament isn’t new to the silver screen by any means. Biblical stories have been portrayed through film and television for decades.

The latest biblical film to hit the screens is “Exodus: Gods and Kings,” which will be released on Dec. 12 and stars Christian Bale as Moses and Joel Edgerton as Pharaoh Ramses. This biblical epic is directed by Ridley Scott, whose most notable films are “Alien,” “Blade Runner,” and “Prometheus.”

The first highly grossing biblical film dates back to 1956 with Paramount’s “The Ten Commandments,” which proved to be a pivotal moment in film history. And thus on the third day, the film’s director Cecil B. Demille said, “Let there be profit!” And the biblical film epic was born.

We’ve come a long way since 1956. The special effects have greatly improved, and the sets have become more extravagant and detailed. As with the entire industry, the visual aesthetic has transformed.

This past year alone has seen the explosion of biblical movies, beginning with “Son of God” and “Noah” and ending with “Exodus: Gods and Kings.” 2014 has become the “Year of the Bible.”

Even though the visual aspect of these films has improved, I can’t help but worry about the underlying changes in the stories. Darren Aronofsky, director of “Noah,” even called his film the “least biblical, biblical film ever made.” His goal was to portray Noah not as a devout believer in God but as the world’s first environmentalist.

It dances on a tricky line between telling the best story and offending someone’s beliefs. Some people believe biblical stories to be completely true, and when they see Hollywood exploiting their faith for money, it often leads to controversy.

After watching the trailer for the first time, my immediate thought was, Since when did the Bible get so dark? Even seeing Aronofsky, whose style is optimized in “Black Swan” and “Requiem for a Dream,” direct a biblical film made me skeptical.

My biggest fear for biblical movies like “Exodus” is that they will turn into “The Dark Knight Part Four.” Even the trailer makes Moses look like this epic vigilante of the Old Testament.

I grew up Catholic and went to Catholic school where we used to have Bible class. I honestly don’t remember that many sword fights and epic battles between Moses and Pharaoh. I also don’t remember reading about Moses training people to fight.

I’m curious to see the progression of biblical movies and the way they will impact our society. I just never thought a summer blockbuster would ever be about the Bible, let alone a dark and twisted version.

Regardless, I will probably end up watching “Exodus” just because I want to see the contrast from the 1956 version.