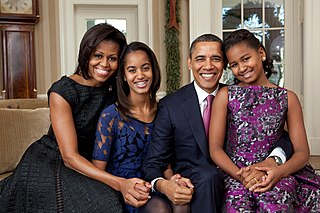 A picture of the first family in 2011 with Malia and Sasha in between their parents. PHOTO VIA Wikimedia Commons

Politics is confusing. It’s complicated, multifaceted and hard to keep up with. Undoubtedly, there are many concepts that people don’t really grasp about politics, and it’s acceptable to misunderstand certain ideas. On the other hand, there’s common sense, and on Saturday, Elizabeth Lauten, communications director for U.S. Representative Stephen Fincher, showed the world that she didn’t have any.

Lauten posted a scathing Facebook status, later deleted, aimed at Sasha and Malia Obama, the 13- and 16-year-old daughters of U.S. President Barack Obama, after pictures of the two girls at the annual turkey pardoning were released, some of which pictured the girls looking less than entertained at their dad’s corny jokes. Lauten, in the post, critiqued the girls’ outfits and used the opportunity to throw some barbs at the president and the first lady.

“Dress like you deserve respect, not a spot at the bar,” Lauten advised the Obama girls in the post. Sasha — in a dress and a cardigan — and Malia — in a sweater, skirt and tights — were apparently too risqué for a White House engagement.

Lauten also managed to slip in a dig at the president and first lady, writing, “Then again, your mother and father don’t respect their positions very much, or the nation for that matter, so I’m guessing you’re coming up a little short in the ‘good role model’ department.”

How about we go a little easy on the whole sexualizing young girls brigade? To my knowledge, shaming minors for wearing “revealing” outfits doesn’t benefit anyone involved.

It isn’t just that Lauten humiliated and demeaned the Obama girls, but that she used it for political leverage. Lauten, who works for a Republican representative, is predictably a Republican herself. While sharing legitimate criticism of the Obama administration would be totally tolerable, using the appearance of the president’s children to add in a snarky dig is absolutely unacceptable.

After the post went viral, Lauten apologized on Facebook and sent her apology post to ABC News. She later resigned. Lauten is the perfect example of how not to conduct yourself on the Internet, and reminds us that political exchanges should be constructive, not evocative of an episode of “The Real Housewives.”

Sasha and Malia, you girls keep doing what you’re doing, and thanks for reminding us that even the president can still make ridiculous dad jokes.