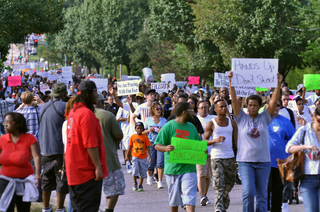 Protesters in Ferguson staged a peaceful protest in the form of a “die-in” on Sunday, marking 100 days after Michael Brown was shot and killed by a police officer./PHOTO VIA Wikimedia Commons

Ferguson protesters staged a “die-in” in St. Louis on Sunday, 100 days after Michael Brown’s death. Their bodies outlined with chalk on the pavement, participants laid down in a major intersection in front of Washington University. Some held flowers, while others held signs. But the main opinion held by the protesters is clear: Michael Brown’s death will not be forgotten.

The die-in (similar in name to the sit-ins of the civil rights movement) also came in anticipation of a grand jury’s verdict on the officer who shot and killed Michael Brown, due out any time this month. Though lying on the ground is the epitome of a peaceful protest, on Monday, the Governor of Misssouri declared a state of emergency for when the verdict is released.

The protests in Ferguson have been going on since early August. Being a white kid from the suburban Midwest, it’s difficult for me to understand the weight of this incident. Though I can’t vouch for anybody else or the movement, I think Michael Brown’s death was just a link in the long chain of racism that’s continued in the U.S. since the 1960s (and especially since the new millennium).

What makes the Ferguson incident so important is that it comes at a time when racial tension in America is almost at its peak. All of the angst over racism has fueled the protests in Ferguson. People have had enough, and they’re determined to show the world just that.

The protest movement has matured from its initial frustration-fueled stages to a more careful, organized approach. Whether that’s to continue after the verdict is released is yet to be seen, but enlisting the Missouri National Guard to patrol Ferguson doesn’t exactly reassure the protesters that their voices are being heard.

The die-in protest was ingenious for its passive resistance. Hopefully the protesters continue their trend of nonviolent action to get their point across, and hopefully the government lets them. The protests have gone on long enough that they’re bound to continue in the future. Racial tension is high, and will only build as long as injustice grows.