Dec08 Comments Off on What Do We Really Know About Our Meds? 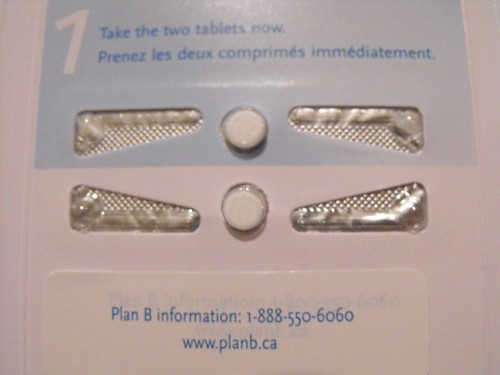 The Plan B pill can be found in multiple regions of the world including North America./PHOTO VIA Flickr user meddygarnet

According to Mother Jones, “The European manufacturer of an emergency contraceptive pill identical to Plan B… warn women that the drug is completely ineffective for women who weigh more than 176 pounds and begins to lose effectiveness in women who weigh more than 165 pounds.” The report even goes on to state that some generic American brands have an identical chemical makeup.

Therefore, the average weight is already too much for the morning-after pill to be fully effective, and full effectiveness already acknowledges more than a 10 percent chance of failure.

But why are we just hearing about this?

And even if this new information appears on the manufacturer’s website, I can’t say that I know anyone who would take the time to check out every single medication website to check for efficacy, let alone a full list of side-effects.

And who actually listens to those end-of-commercial speedily read summations of all of the possible negative consequences of taking a particular medication? Certainly not me.

Partially because they are nearly impossible to fully decipher when the words are spoken at what seems like triple-time, and partially because most of us have probably flipped channels by the fifth second of the commercial.

Some studies even suggest that most Americans don’t have the necessary medical literacy skills to comprehend their own medications (about 66 precent of overall Americans and higher levels within minority groups).

All I can glean from this information is that Americans could use some serious education about what they are putting into their bodies on a daily basis, and the FDA should probably be making more of an effort to make this vital information easily accessible to the public.