Nov11 Comments Off on Perspective about Typhoon Haiyan and Being Filipino 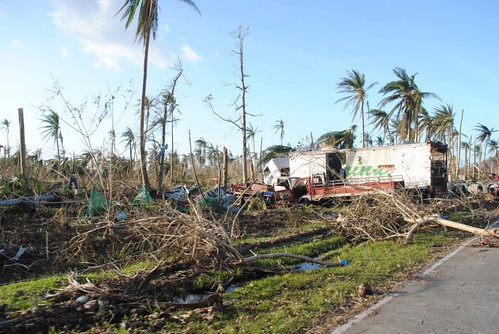 The damage of Typhoon Haiyan in Leyte./PHOTO VIA Flickr user EU Humanitarian Aid and Civil Protection

It is never easy to hear when your home undergoes some kind of disaster.

I hail from the Philippines. More specifically, I hail from the capital, Manila, located up north in the region of Luzon. Fortunately, my family and most of the Metro were barely affected by the typhoon. It was the southern provinces in the Visayas region that endured most of the damage.

On Nov. 8 2013, Typhoon Haiyan struck the Philippines and devastated thousands. The typhoon sustained winds of 313 km/h and gusts of 380 km/h and is one of the strongest typhoons in recorded history. Authorities believe that around 10,000 are dead. President Benigno S. Aquino III declared a “state of calamity” to, hopefully, release emergency funds from the government.

Admittedly, the Philippines is no stranger to typhoons. Typhoon Reming and Typhoon Milenyo hit in 2006 and were some of the strongest cyclones that laid waste to the country.

I remember exactly where I was at the time of Typhoon Milenyo; I was sitting at home for a week with no electricity.

Day in and day out rain poured overhead and while I was cursing the fact that I had no Internet, a little niggling voice in the back of my head reminded me that other people had it worse.

I wasn’t at home when Typhoon Haiyan hit. Since I was in Boston and so far away, I had to hear about Typhoon Haiyan from friends and family back home. Being this far away is not as comforting as one would think. It is not easy to see and to hear the destruction that appears on the news each day.

The comforting thing is to hear the stories of strong Philippine spirit and camaraderie in challenging times.

The Filipinos have coined the term “waterproof sprit” as the Philippines has managed to weather – no pun intended – storm after storm. With each storm the more evidence there is to the fact that we (as Filipinos) are, indeed, waterproof.

It is hard to start all over again when you have little to begin with. The people of the Philippines manage to endure all of this and make the best of each situation. It is through the strength of the Philippine people and the compassion of those who help that the Philippines can grow in the face of adversity.

To help those affected by Typhoon Haiyan: