Oct27 Comments Off on Lauren in London: But Actually, Edinburgh 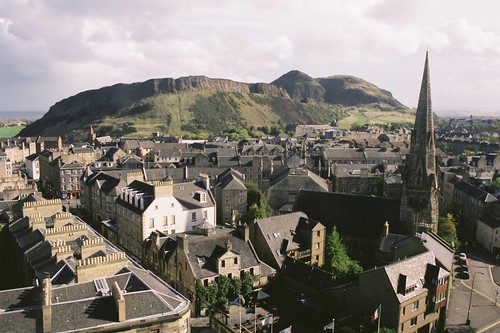 Greetings from the Scottish countryside (or right outside of Edinburgh). The east coast of Great Britain? Who really knows? What I do know is that my friend Rima and I went to Edinburgh (pronounced “Edinboro,” fun fact) on a whim and it couldn’t have been a better decision.

That wasn’t always the case with this trip, though. We booked the train tickets just after midnight Thursday morning and managed to get them at a reasonable price for a trip beginning fewer than 72 hours later.

After booking the train tickets, we perused Hostelworld.com only to realize that there was nowhere in Edinburgh we could stay for less than £90 a night per person (ridiculous when you’re only staying one night, and that’s even before you convert the price over to US dollars).

I did some creative Google searching, ending up at some random site with an available room in a “guest house” for £30 a night. Finding it a better alternative than sleeping in the train station, we booked the room.

The next day, I was GChatting with a friend and told her about my latest accomplishment: booking this trip. When I got to the part about the train, she reminded me of her worst experience while abroad, which was the train ride back from Edinburgh.

Turns out she booked the exact same train tickets we did. The reason why the tickets were so cheap was that the train companies basically sell tickets that are valid for the entire day, making it a great way to travel flexibly, but also not technically guaranteeing seats on a certain train with tickets sold at our price point. Essentially, we had just purchased standing room-only tickets for a five-hour train ride (oh, did I forget to mention that part about how long the train ride is?).

I broke the news to Rima, who took it much better than I did. We resolved to try to fix it, and if not, make sure we were standing near a widow, because the ride up the coast was, by all accounts, supposed to be incredible. The next day I marched over to Kings Cross in search of a customer service kiosk for answers, which is hilarious because customer service in this country is basically non-existent.

We were up before the sun on Saturday morning, headed to Kings Cross with as much excitement as we could muster for a seatless train ride at 7 a.m. Picking up our tickets, I asked the kind man (using that term loosely, for the record) at the kiosk about the seat situation on the train, saying there was no mention of seats, or lack thereof, on the website — even the fine print in terms and conditions. He chuckled and replied, “You know, you can’t always trust what you read on the Internet.” And then pointed out a typo on the Transport for London website.

Knowing it was a battle we couldn’t win, we set out for the departure boards to wait for the train platform to appear. Once platform 7 flashed on the screen, we booked it through the station and onto the train, finding seats that weren’t reserved, therefore fair game for us as third class (or so it felt) passengers. We even got a table! Take that, condescending man at the kiosk.

After we found our seats, the rest of the trip went swimmingly. Way better than we could have imagined, to be honest. The guest house was basically a hotel-hostel hybrid with private rooms, shared bathrooms and no real concierge. Plus, it was a street over from Arthur’s Seat, a dormant volcano in the middle of Edinburgh and a stone’s throw from the city center.

We climbed Arthur’s Seat despite definitely not being in the correct attire, but the photos are absolutely worth it. We also got caught in a rain storm at the top — but that only added to the experience, in my opinion. Plus, I don’t think we got pneumonia, either, so take THAT Mother Nature. We spent the evening warming up at a cozy gastropub and ended up in bed by midnight. The next day, we started the day with a cheap and delicious Scottish breakfast, complete with black pudding (also known as blood sausage. Holla!) followed by a trip up to Edinburgh Castle and shopping on the Royal Mile. We bought enough tartan and cashmere to last the winter, not to mention the (probably) overpriced tin of Walkers shortbread cookies commemorating the birth of Prince George.

We capped the sightseeing with afternoon tea at the Missoni Hotel (who knew they had a hotel in Scotland of all places?) which was made even better by the attractive men in Missoni kilts working the valet. And to top it all off, we not only made the 5:30 train back to London. We got seats.