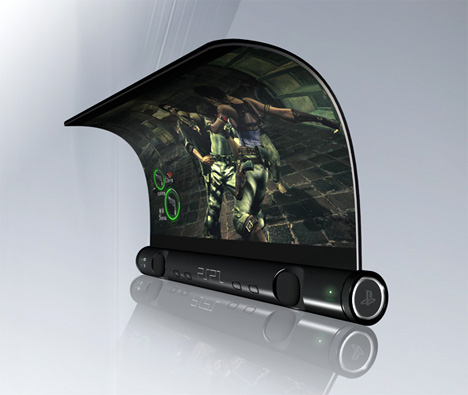 This may be close to what your smart phone will look like one day./PHOTO VIA CharterWorld.com

Even going as far back as the Blackberry, smartphone design has remained relatively constant. The last great smartphone change was the touchscreen, or rather, the perfection of the touch screen, thanks to Apple.

Lately, there has been overall stagnation in smartphone development. Sure, 4G changed smartphone use and better cameras/processors/operating-systems allow more preferential customization, but aside from internal differences, smart-phones are, more or less, interchangeable.

However (there’s always a however) the market could be rapidly altered with LG’s synthesis of a bendable, unbreakable plastic screen, which is the first step to actual curved screen technology. Still squealing like a school girl? Me too.

Curved screens have already been put to use in the HDTV market by LG and Samsung; however, these top-of-the-line models run a cool $9,000-$10,000 making them far too expensive for the average consumer.

In the few short months since LG’s invention, Samsung, in a Christian Science Monitor article, announced the South Korean exclusive Galaxy Round which has a curved, ergonomically-friendly shape.

Additionally, LG is supposedly unveiling a curved smartphone that curves top to bottom for only God knows why.  While these “innovations” may seem trivial, we must consider future applications for true flexible screens.

Imagine a bracelet that can unbend and act as a phone. Like a snap bracelet with a pulse.  This could be the next leap forward after smart-watches don’t sell at all. And after that? Google Glass (the wearable glasses-computer hybrid) could be boiled down into a computing contact lens. Sunglasses-computers could exist on a commercial scale.

But the market shouldn’t change anytime soon. Curved phones are interesting, but they’ll only sell because they’re a novelty. But then developers will actually begin making real-world applications for the curved screens. And then Apple will curve something, and everyone ages 12 to 27 will have a stroke and the market will change permanently.

That is when we’ll see the really futuristic uses. Because, we’ve just about hit the technological apex for flat screen innovation. You heard it here first, curved glass is the future.