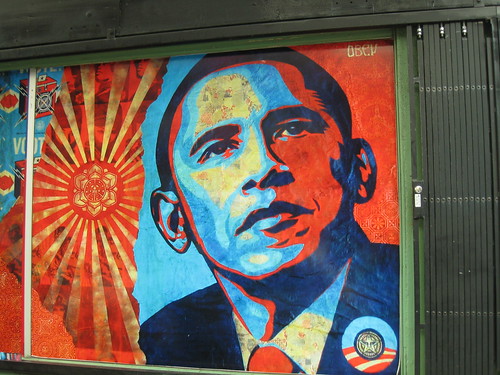 Vine, bringing us one step closer to Mr. President more than this piece of local artwork/ PHOTO VIA Flickr user Robert Hoge

One thing I never thought I would share with the President of the United States? We both Vine. That’s right America; your President was recently featured in his very own Vine, a relatively new social media app that let’s you put together short video clips that you film on your smart phone.

According to an article from Yahoo! News, the President’s first Vine features Bill Nye the Science Guy and PBS host LeVar Burton. They are promoting the third annual White House Science Fair, an event that encourages science and celebrates student winners and their projects from all over the country. During this event, Obama goes from exhibit to exhibit examining different scientific and technological experiments and designs. Fortunately for all of us, this leads audiences to the White House’s second Vine post: Mr. President himself skillfully pedaling a stationary bike in his suit and tie, demonstrating the “bike-powered water filtration system”.

This Vine is one step among many that the White House has been taking to immerse itself more fully in social media, which is a great thing to see. It takes our President down from the heightened position he has. Vine makes him seem far more approachable, more like a regular guy who also rides stationary bikes on the White House lawn to filter water.

I would personally love to see more Vine videos to get a glimpse at the daily activities and events our President and the White House partake in. The Vine of our President on a bike is just another example of how social media has made our world smaller, bringing people closer to each other for better or worse. The White House also has a Twitter that let’s us know what’s going on up there on Capital Hill. Hopefully they keep it up.