Apr17 Comments Off on Should college insurance cover sports-related injuries in current and former college athletes? 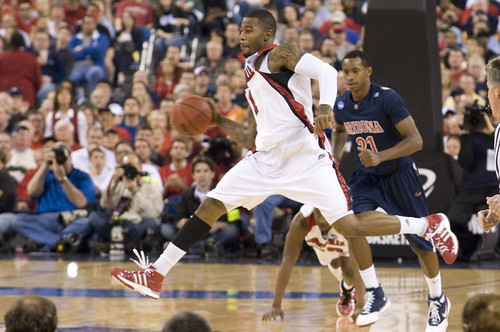 Kevin Ware’s teammate Terrence Williams. Ware’s injury has stirred up controversy regarding whether or not the injuries that college athletes sustain while playing college sports should be covered by college insurance plans./ PHOTO VIA Flickr user Bradjward

Kevin Ware recently suffered one of the most gruesome sports injuries in the history of the NCAA tournament. While attempting to block a Duke player’s shot, the University of Louisville point guard landed awkwardly on his legs, which resulted in his leg breaking in a very graphic and painful way. I would show you the video of the incident but I will spare you the gore.

After sustaining the injury, Ware was treated for his injuries. Officials at the institution he attended, University of Louisville, stated that Ware would not be on the hook for the medical expenses regarding his injury while he was in college. All Louisville athletes will not have to pay out-of-pocket for injuries sustained while still in school. However, this isn’t always the case.

Another issue surfaces when athletes graduate or move on to the big leagues. The New York Times reported that universities do not cover the health care expenses for post-college injuries that arise from injuries sustained in college. So if Ware had leg problems down the road, he will be liable for those medical bills.

So the question is: should colleges extend their medical insurance to athletes after they leave their institutions?

I say yes. NCAA basketball is an empire earning over $780 million a year simply based on the performance of the ballplayers. NCAA’s revenues stem from sports fans paying to attend games, television broadcasts of games, and countless donations. The NCAA has more than enough money to provide schools with the funds to medically cover their unpaid athletes. So money isn’t really the issue; it’s the colleges themselves.

College scouts travel all over the country looking for athletes to add to their teams in hopes of creating a championship caliber  team. Once athletes commit to a school and play competitively, there is a possibility that they will get injured. Colleges should not withdraw their support for these hand-selected students when injuries occur. The least they can do is provide full medical insurance for  athletes that these recruiters compete for.

When athletes leave college, I believe that universities should continue to cover the medical expenses related to injuries sustained or related to their time spent faithfully serving the school as student-athletes. In other words, after Ware leaves Louisville, I believe the school should cover the bills of any later health problems resulting from his broken leg. Athletes provide innumerable amounts of publicity for colleges, entice prospective students to attend their schools and build up the reputations of their institutions. They do so much for their universities and it’s only right for the schools to return the favor.