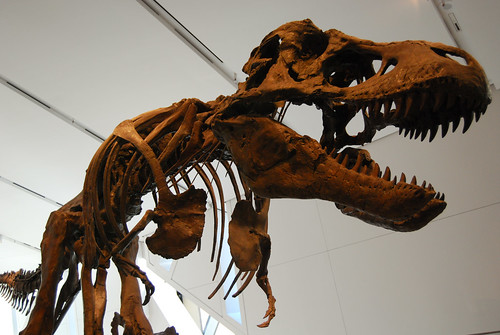 Fossils like this one, displayed in exhibits, have nothing on the robotic dinosaurs that will be displayed in Clive Palmer’s exhibit./ PHOTO VIA Flickr user Mike Shaver

If you were a multibillionaire, what would you do with your money?

Well if your name was Clive Palmer—an Australian billionaire who has made his fortune in mining—you might build a life-sized replica of the Titanic and prepare it for sailing. You might also order more than 100 life-sized robotic dinosaurs from China to create the world’s largest dinosaur exhibit.

Yes.  This man is seriously building the “Titanic II”—which expects completion in 2016—and a park of giant, robotic dinosaurs.

Rumors of Palmer’s dinosaur exhibit stemmed in early August, in which he initially denied. But now the eccentric Aussie has officially released his plans to turn his North Australian resort into a robo-Jurassic Park.

In a March 30 edition of Discovery News, Palmer reported that he plans to acquire 165 “animatronic dinosaurs” total, with 100 expected to arrive by the end of April. These dinosaurs—some of which stand seven meters tall and weigh 1.2 tons—will be able to move their chests, wag their tails and blink their eyes. He already has two of these massive robots at his Palmer Coolum Resort, named Bones and Jeff.

Sure it’s awesome—anyone with half of a soul loves dinosaurs. But why spend billions on it?

Well according to Palmer in a Discovery News report: “I want to spend the money I’ve got before I die.”  So, naturally, he builds a robotized Jurassic Park and a real-sized Titanic.