Mar18 Comments Off on The return of the Twinkie 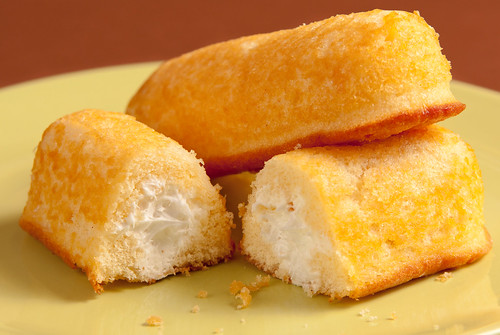 Twinkies, along with other delicious Hostess snacks, will be returning to shelves this summer, according to an article by the New York Times/ PHOTO VIA Flickr user Christian Cable

Attention all Twinkie lovers! The Daily Free Now’s official Twinkie reporter, aka yours truly, has good news. Your favorite snack has a good chance of returning to store shelves this summer!

I’m sure everyone remembers Hostess’s announcement that they were filing for bankruptcy last November. Twinkies, Wonder Bread, and other Hostess products have not been produced since the company’s fallout. I honestly believed that Twinkies were never going to appear in stores ever again. But they received a reprieve.

According to an article by the New York Times, in an effort to liquidate its business, Hostess has been auctioning off its various brands over the past four months. Metropoulos & Co. and Apollo Global Management agreed to buy the Hostess cake brand for a whopping $410 million. Since no other qualified bids were submitted, Metropoulos & Co. and Apollo Global Management will become the new owners of Hostess products.

In a statement, Metropoulos & Co. CEO and founder Dean Metropoulos said the firm was looking forward to having “America’s favorite snacks back on the shelf by this summer.”

So after all the drama and chaos surrounding the demise of the Hostess empire, Twinkies will likely return to stores this summer. Who would’ve thought? It’s great to see that companies actually had interest in continuing the production of Twinkies and other Hostess products like Sno Balls and Ho Hos. Americans have been enjoying these snacks for over 80 years and it would have been a shame for the snacks to just disappear from American culture. Luckily this won’t happen. All in all, I would like to personally thank Hostess for my mini-heart attack and slight depression for the past few months. I now have a new reason to look forward to the summer: an all-American snack will be returning to grocery store shelves.